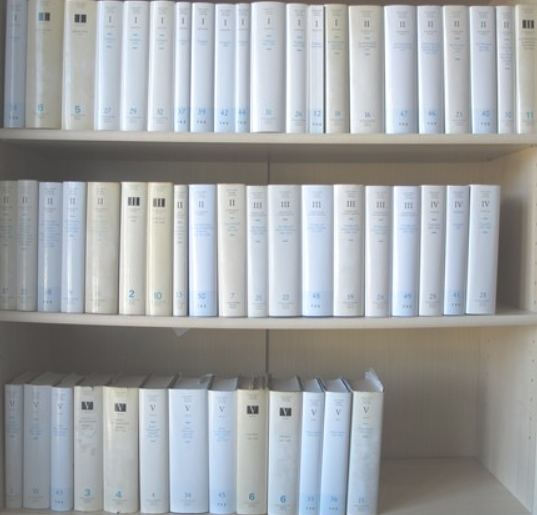 Since 1971 the TVZ (Theologischer Verlag Zürich) has published more than 50 volumes of the Karl Barth Complete Edition, edited by the head of the Karl Barth Archive. It presents Karl Barth's Texts in a way that informs and supports research and is yet accessible for a broader audience. Every volume is thus redacted thoroughly by a suitable circle of editors.

The Complete Edition will contain an estimated 75 volumes. It won't however contain the Church Dogmatics and Barth's monographic works.

The Complete Edition is subdivided into the following categories:

A detailed overview of the volumes can be found here

In cooperation with theForum für Edition und Erschliessung (FEE)  of the Universiy Basel we are currenty establishing a concept of digitalization for the Complete Edition. The digitalized volumes will be accessible through emono.

Structure of the Edition:

Every text, or rather every volume, entails an introduction, explaining the prompting event, the development and writing process, the historical and biographical background as well as the reception history of the text in question. Basis for the Edition is usually the print edition authorized by Barth himself.

Every text is marked with footnotes, containing information on allusions, citations and referenced persons; Bible references and allusions are marked in squared brackets. The verification is usually based either on the literature Barth used himself, or on the editions he could have accessed.

The textcritical apparatus contains variants if any significant deviations from the edited text can be detected.